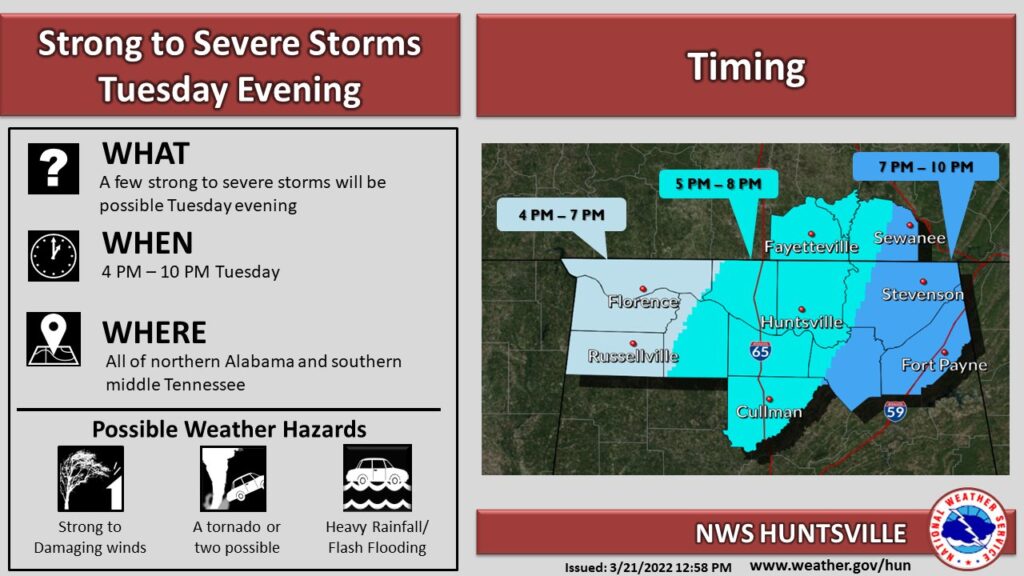 The National Weather Service has issued a flood watch and wind advisory as a strong storm system is expected to arrive in the area Tuesday.
The Shoals could receive 2-3 inches of rainfall, and wind gusts could go as high as 40 mph, according to the weather service.
The flood watch runs from 4 p.m. Tuesday to 7 a.m. Wednesday, according to a weather service statements, which said, "Excessive runoff may result in flooding of rivers, creeks, streams, and other low-lying and flood-prone locations."
"Ground conditions are saturated from recent heavy rainfall," the statement reads. "A strong storm system will impact the area Tuesday afternoon and Tuesday night, bringing the threat of heavy rainfall. Forecast rainfall totals of 2 to 3.5 inches are possible in the watch area, and any localized heavy rainfall could lead to flash flooding.
The wind advisory calls for south winds of 15-25 mph, with gusts up to 40 mph. The advisory runs from 10 a.m. Tuesday to 7 a.m. Wednesday.
"Gusty winds could blow around unsecured objects," it states. "Tree limbs could be blown down and a few power outages may result."
Forecasters said they also cannot rule out the possibility of a tornado, although that is more likely for south Alabama.