White in custody, heading back to Alabama 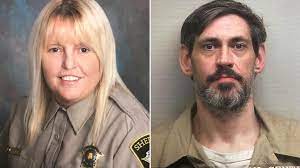 White in custody, heading back to Alabama

FLORENCE — Authorities are on their way back to Alabama with capital murder suspect Casey White and he is expected to appear before Lauderdale County Circuit Court Judge Ben Graves tonight.
During a brief noon hearing today, Graves said he will arraign White on his first-degree escape charge, and discuss future court hearings with District Attorney Chris Connolly and defense attorney Jamy Poss.
Afterward, White will be taken directly to Donaldson Correctional Facility, rather than the Lauderdale County Detention Center.
"It is the court's present intention that Mr. White will not be be held for another hour in our jail," Graves said.
Authorities have been searching for White and former Lauderdale County Assistant Director of Corrections Vicky White since they were discovered missing on April 29.
That search ended Monday when U.S. Marshals found them leaving a motel in Evansville, Indiana, and a chase ensued, leading to a crash.
Vanderburgh County, Indiana, Sheriff Dave Wedding said Vicky White died from an apparent self-inflicted gunshot wound immediately following the crash. Authorities took Casey White into custody.
White is charged with capital murder in the 2015 death of Connie Ridgeway. The trial is scheduled for June 13 but that could be delayed.
Following the hearing, District Attorney Chris Connolly said he would not be surprised by a delay.
"We're ready," Connolly said after today's hearing. "I anticipate that it will be delayed but it won't be based on us asking for it. That'll be the judge's call."
Connolly added Lauderdale County Sheriff Rick Singleton has arranged with Donaldson officials for the immediate return of White.
Wedding said Casey White and Vicky White were carrying $29,000 in cash, four handguns and an AR-15 rifle and were prepared for a shootout when they were captured.